What an exciting time we have been having at Charnwood, on Tuesday 15th May we saw that the eggs that had spent three weeks in an incubator in Anne’s office were beginning to show signs of movement, and small cracks in the shells were appearing. The children in after school club that afternoon watched as the first chick’s beak appeared to be coming through the shell.

We were all very eager to arrive on Wednesday morning to see our first chick out of its shell and in the incubator!!

Over the course of Wednesday and Thursday more excitement followed and we now have four very cute chicks chirping away in Nursery, much to the delight of both children and staff. They spent the weekend at Sue’s house.

And don’t worry – we have found a lovely home for them to move onto once they are a bit bigger. 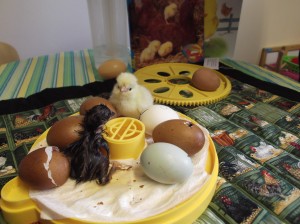